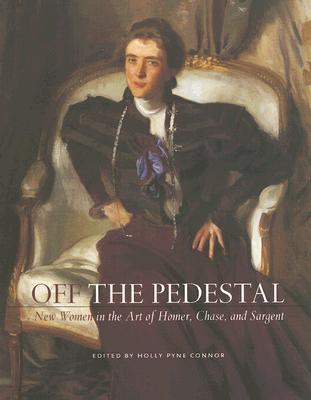 OFF THE PEDESTAL : NEW WOMEN IN THE ART

Pictures of women portrayed as professional, athletic, and intellectual seem common to us today, but until the late nineteenth century, such representations of strong, self-reliant women were virtually, if not completely, absent from the visual arts and literature.

Off the Pedestal is the first book to explore the radical change that occurred in the representation of women immediately after the Civil War. Three critical essays draw on the visual culture of the period to show how postbellum social changes in the United States brought issues of subordination and autonomy to the surface for women in much the same way that it did for blacks. As women began attending college in greater numbers, entering professions previously dominated by men, and demanding greater personal freedom, these "new women" were featured more frequently in the visual arts and in a manner that made it clear that they had ambitions outside the domestic sphere.

The complexity and pervasiveness of these women fascinated many of the most well known painters, illustrators, and writers of the time, including Winslow Homer, Mary Cassatt, John Singer Sargent, William Merritt Chase, Charles Dana Gibson, Henry James, Edith Wharton, and William Dean Howells. The women represented in works by these and other artists reflected those who, in life, were becoming liberated from the confines of the home and the sole company of their husbands and children. They were portrayed reading books and newspapers, riding bicycles, hiking in the mountains, and working as professionals.

The depiction of female self-reliance, however, was not uniform throughout all visual media. Although painters tended to portray these women positively, illustrators and photographers often vilified or satirized them. Among these negative stereotypes one could find the "manly" new woman--a contested figure whose appearance in journalism and elsewhere pointed to underlying social anxiety and demonstrated a widespread backlash against female empowerment. The medical community also condemned new women by arguing that females who studied or exercised vigorously would become sick, insane, or even sterile, thus threatening the welfare of the country.

Featuring more than seventy color and black-and-white images, Off the Pedestal is an engaging and informative window into the ways that identities and attitudes are forged on the stage of visual culture.

Title: OFF THE PEDESTAL : NEW WOMEN IN THE ART

OFF THE PEDESTAL : NEW WOMEN IN THE ART